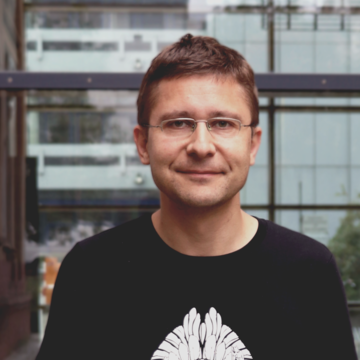 In general. One of my two main research interests is in (infinite-dimensional) integrable systems associated to partial differential equations, their spectral theory and their relations to geometry.

The sinh-Gordon equation. One such integrable system that I have studied extensively is that of the sinh-Gordon equation. This equation is of geometric relevance, because every real-valued two-dimensional solution of this equation corresponds to a minimal surface in the 3-sphere or to a constant mean curvature (cmc) surface in the Euclidean 3-space without umbilic points. Beginning from the case where the solution is doubly periodic (which was investigated by Hitchin and by Pinkall/Sterling, and which corresponds to minimal resp. cmc tori) I investigated simply periodic solutions. I adapted Hitchin's method of constructing spectral data for doubly-periodic solutions to the simply-periodic case, and found asymptotic characterizations for spectral data of this kind. I was also able to solve the inverse problem associated to this situation, i.e. to reconstruct the solution of the sinh-Gordon equation from its spectral data.

For the future I plan to extend this research to investigate solutions of the sinh-Gordon equation which have isolated singularities. Such solutions with isolated singularities arise from minimal surfaces resp. cmc surfaces with umbilic points. It is highly interesting to consider such solutions because compact minimal resp. cmc surfaces of genus g at least 2 always have umbilic points (3g-3 of them, when counted with multiplicity). Presently, very little is known about the geometry and moduli space of them, and understanding their geometry near the umbilic points (corresponding to solutions of the sinh-Gordon equation with isolated singularities), it might be possible to make a step towards understanding the moduli space of these surfaces

The non-linear Schrödinger equation. Another interesting integrable system is the one associated to the (self-focusin) non-linear Schrödinger (NLS) equation. This partial differential equation is of course originally motivated by its significance in quantum mechanics, but another inner-mathematical motivation is that it describes closed curves in the 3-dimensional space forms and their binormal flow. One important result is that closed finite gap curves are dense in the set of all closed curves. For R^3, this result has been shown earlier by Grinevich (by other methods); by applying integrable systems methods, I have extended this result in joint work with Martin Kilian to S^3, H^3 and also to the 2-dimensional space forms.

Pinkall/Sterling have conjectured that for any closed curve in a 2- or 3-dimensional space form, there exists a sequence of cmc tori which converges to the given curve in a certain sense; this is called the soul conjecture. I am interested in applying methods of integrable systems to this conjecture. Because closed curves correspond to the integrable system of the NLS equation, whereas cmc tori correspond to finite type solutions of the sinh-Gordon equation, the interrelations between these two integrable systems are of fundamental importance to this approach.

I am interested in extending my research on the submanifold geometry of Riemann symmetric spaces, for example by the classification of more complicated types of submanifolds (like, for example, parallel submanifolds), or by considering Riemann symmetric spaces of higher rank. Another topic of interest would be to consider real Hopf hypersurfaces which satisfy a given curvature condition. I am also interested in the use of computer algebra to facilitate solving the systems of non-linear equations associated to such classes of submanifolds, and perhaps to automate the solving of such classification problems by computer as far as possible.

My lecture “Probability Theory'', which I gave at the Stuttgart University, was designated by the student representation (Fachschaft Mathematik) of that university as the “best intermediate course of the academic year 2011/12''.

Photo credit: Nikoletta Babynets
In order to improve performance and enhance the user experience for the visitors to our website, we use cookies and store anonymous usage data. For more information please read our privacy policy.
Allow
Reject